Now is the time to deepen our commitment to making honest change in our community. As Evanston continues to

recover from the depths of Covid19, ECF is laser-focused on addressing the inequities laid bare by the pandemic.

Please support our ongoing efforts across Evanston with a gift to the Now! Fund

who we are and
how we’ve grown!

The Evanston Community Foundation was established in 1986 to address Evanston’s big issues. Restless idealists realized the power of endowment to address long term challenges and needs they couldn’t foresee. They set their sights on a community foundation for Evanston’s future.

growing toward our potential

The potential for community leadership was implicit from the start but challenging to achieve with the Foundation’s slender resources. ECF was fortunate that the transformative years of the Communityworks Initiative, a partnership with the Grand Victoria Foundation and seventeen other Illinois community foundations, began in 2003. We committed to building our own capacity as an organization, to developing a strategic grantmaking plan that matched local needs and deployed community assets, and to raising an endowment dedicated to the target issues identified in our community impact plan. 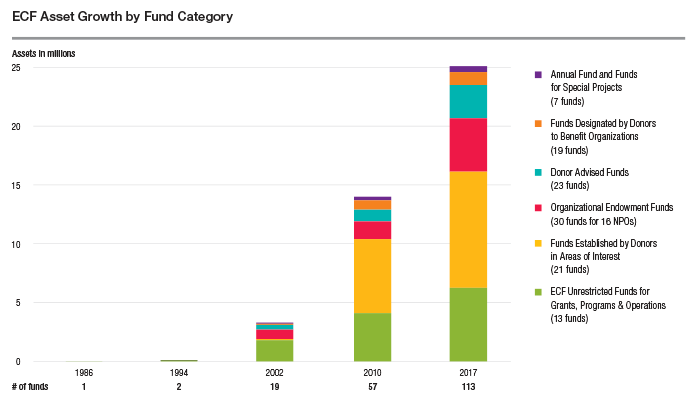 Today’s ECF goes beyond grantmaking. We build partnerships with major institutions to set goals and achieve changes that will make Evanston a better community for more of its people. The Foundation continues to look to the future of Evanston through the grants and investments in community leadership that we make today, and by building the endowed funds to support this work for GOOD. We look working to working with you!

Learn more about giving and the power of endowment.